West Kentucky Community and Technical College (WKCTC) was recognized in an award ceremony in Washington, DC, as one of the top ten community colleges nationally in the prestigious and bi-annual Aspen Prize for Community College Excellence.

More than 200 WKCTC faculty, staff, students and college supporters listened to a live Web broadcast of the Aspen ceremony from Washington D.C. Tuesday as officials recognized WKCTC as a finalists and named Lake Area Technical Institute in Watertown, South Dakota as the winner of the 2017 Aspen Prize for Community College Excellence. 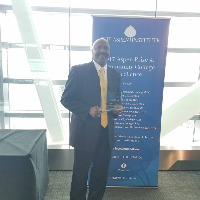 “This has been such an incredible journey since it began in 2011,” said WKCTC President Anton Reece, in a pre-recorded message to those watching the live broadcast in Paducah Tuesday. “We have shared the unique distinction of being one of two colleges in the nation, to be recognized not once, not twice, not three times but as a four-time national finalist and that is an incredible achievement that we want to celebrate and continue to build that legacy on.”

WKCTC is one of 16 community colleges in the Kentucky Community and Technical College System (KCTCS). “I’m extremely proud of the faculty and staff at West Kentucky Community and Technical College for once again being a finalist for this prestigious award,” said KCTCS President Jay K. Box. “Being a finalist each of the four times the Aspen Award has been presented is phenomenal. The KCTCS family is celebrating with them today.”

Aspen officials noted that from partnering with local organizations, outreach to minority students, to maintaining programs that allow students to earn college credit while completing high school, WKCTC’s ongoing dedication to improving lives beyond their own doors is remarkable.

“WKCTC has worked hard to successfully close college-level course completion gaps between minority and non-minority students enrolled in accelerated developmental courses,” said former U.S. Representative George Miller, while announcing the college’s recognition. “Working with the community to secure funding to build the Emerging Technology Center, the college has brought together state-of-the-art facilities, customized training for business and industry, and college courses to meet the technology needs of the regional labor market.”

MEDIA REQUESTS: If you are a member of the media and would like to receive a press kit, you may also request a printed press kit from Janett Blythe by emailing janett.blythe@kctcs.edu. Please provide us with your mailing addresses as well as the name of your organization. We will respond promptly.